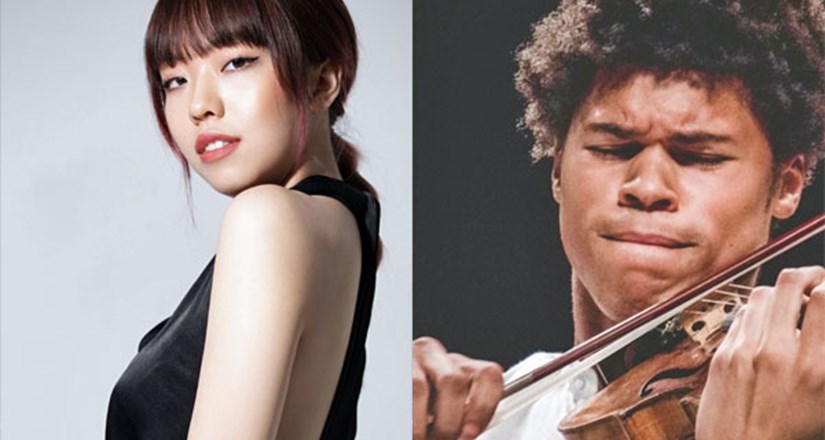 Braimah Kanneh-Mason is a dynamic and versatile young violinist. He has performed throughout the UK, Europe, USA and the Caribbean. An avid chamber musician, Braimah is a member of the Kanneh-Mason Piano Trio, Cassadó Ensemble and Kaleidoscope Collective. He has performed at venues and festivals such as Wigmore Hall, Barbican Hall, Kings Place, Highgate International Chamber Music Festival, Leicester International Chamber Music Festival and collaborated with artists such as Nicola Benedetti, Tom Poster and Priya Mitchell. Braimah is a passionate advocate for equal opportunity and diversity in music education. He has been a mentor at Sistema England, Junior Music Works and a violin tutor for consecutive years at the Antigua Music Camp. He is currently an artist in residence at Brighton College. Braimah studied as a scholarship student at the Royal Academy of Music with Jack Liebeck and Mateja Marinkovic where he was awarded the Harold Craxton Prize, the John McAslan Prize and the Dame Ruth Railton Chamber Music Prize. Braimah currently performs on a Jean Baptiste Vuillame, kindly lent to him by the Beare’s International Violin Society.

Junyan Chen was born in Shanghai in 2000 and began her piano studies at the age of six with William Chen at the Shanghai Conservatory of Music’s Middle School. She is currently studying for a Bachelor’s degree with Joanna MacGregor at the Royal Academy of Music, supported by a full scholarship from the Associated Board of the Royal Schools of Music (ABRSM) and a generous anonymous donor. Junyan worked with the Shanghai Philharmonic Orchestra in 2017, Academy Symphony Orchestra conducted by Edward Gardner in 2019 and she has subsequently performed in many concert halls in China, including the Shanghai Symphony Orchestra Hall, Shanghai Hall, Guangzhou Grand Theatre and Xiamen Concert Hall. Competition successes include at the 2018 City of Vigo International Piano Competition in Spain, where she was the winner of the Silver Medal, People’s Choice Award, Best Spanish Composition Performance Award and City Award. In 2016, Junyan was the winner of all of the piano categories at the Osaka International Music Competition in Japan. She also won the prestigious Osaka Prefecture Governor’s Award and the University of Music and Performing Arts in Vienna Award.