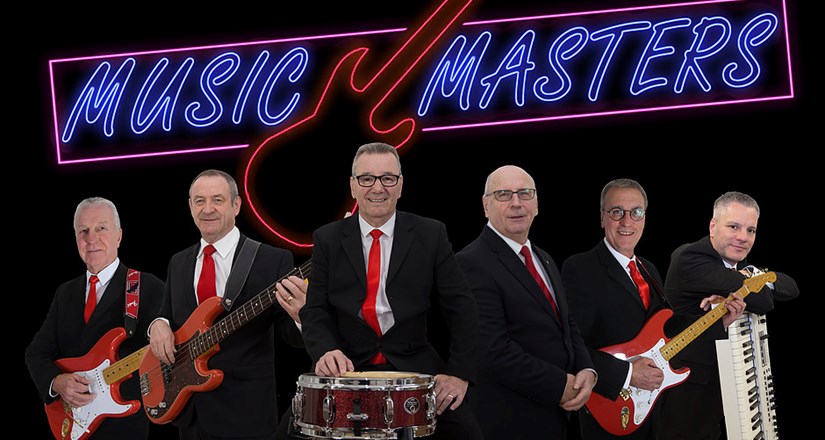 Night of a Thousand Stars

If you love the music and the sounds of this great era, then Music Masters will take you on a nostalgic and unforgettable trip when music ruled the world.

Music Masters are a 6 piece Vocal/Instrumental group from Sheffield, with a wealth of experience behind them, performing the length and breadth of the UK over many years.

They have put together a show featuring some of the best songs and instrumental pieces from the 50s and 60s, a time when popular music swept the whole world, and changed a generation of music lovers forever.

Teenage girls the world over, fell for a new breed of  “Pin Up” boys, unequalled even today.

Take a trip down memory lane, and relax to the melodic sounds of The Shadows, sing-along to songs by the ultimate British pop stars of the time Cliff Richard and Billy Fury, not forgetting music featured in their show from the great British groups we had back then, The Beatles, The Fortunes, Gerry & The Pacemakers, and many more iconic pop stars shaping the sound of the 60’s, that would change the face of popular music forever.

From the U.S.A, Songs by Elvis Presley, Bobby Vee, Bobby Darrin, and Roy Orbison, all feature in their show.

It wasn’t just the pop stars good looks that got them by back then, great songs and instrumental pieces had the 50s and 60s generation Twistin’, Rock n Rollin’ , and Jivin’ the world over.

If you love the music and the sounds of this great era, then Music Masters will take you on a nostalgic and unforgettable trip when music ruled the world.

This event will take place following the relevant COVID guidelines at the time.

For the safety of you and our staff, is recommended audience members wear a mask or face covering in the venue and for the duration of the performance, unless exempt.