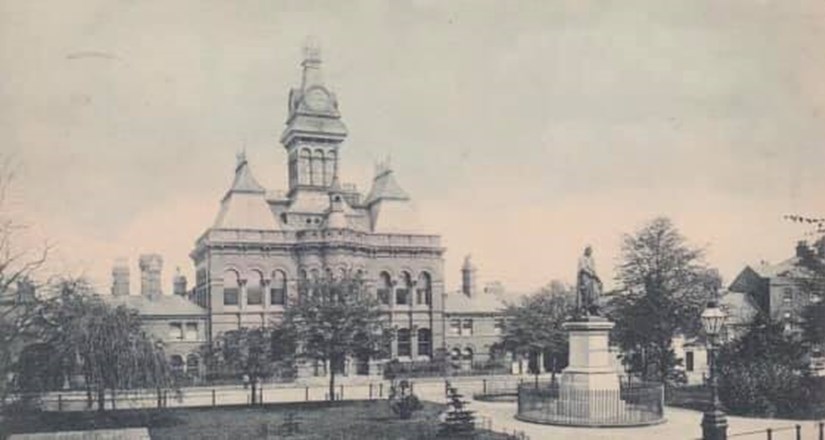 The Guildhall and jail on St Peter’s Hill in Grantham was commissioned in 1866 by Mayor Thomas Winter after criminal Jesse Dale, who was serving 15 years for stealing, twice walked out of the town’s original jail in 1864.

This original Guildhall and jail building stood on the corner of Guildhall Street and High Street and dated from 1787.  After Jesse’s second escape, the governor at the time William Mayer was sacked and a government inspector condemned the building.  The inmates had to be sent to Lincoln.  The site of the demolished Guildhall was bought by the Stamford, Boston and Spalding Bank (later Barclays) and is now home to the Goose at the Bank pub.

On the current Guildhall site was an old school – The Firs – housed in a former town house.  This and the adjoining land were bought for £2,100. Lincoln architect William Watkins drew up the design for the new building and the work was carried out Mr Wartnaby, of Little Gonerby, for £7,260.

The original Guildhall was made up of three separate buildings – the main building which housed a ballroom and courtroom (or session’s hall), a governor’s residence and a jail for up to 18 men and women on two floors.
However, although it seemed no expense had been spared on the building, officers from the South Lincolnshire Militia were less than happy to find it was missing a certain facility when they booked to use the hall – a toilet.  At this point, councillors agreed one should be installed to avoid further embarrassment.

The new Guildhall was also home to the four-sided clock which was the first time many of the town’s residents would have had the luxury of telling the time with any accuracy.  It was this fact that coined the local phrase ‘under the clock’ meaning, ‘to appear in court’.

As late as 1930, publican Frank Milner of the Victoria Hotel, Commercial Road, was let off with a caution for serving out of hours because he set his time by the clock which was, and still is, a little slow.

In 1882 an area of the building was leased to cigar makers Robinson and Barnsdale and 15 years later, to the Grantham Technical Institute. It is said that it is home to a cigar-smoking ghost as, on occasions, the strong smell of cigar smoke will appear in one or more rooms and then after a few minutes, disappear as quickly as it came.

From our What’s On section...